A one-of-a-kind company in Belgium

Green Immo came into being as the result of several observations :

It therefore appeared self-evident that economic interests crossed with ecological interests and that a development project, which did not seek to optimize the use of primary resources, no longer made either economic or ecological sense.

Green Immo aims at developing buildings for housing, respecting strict energy performance criteria, going beyond the current requirements imposed by local governments. Moreover, the materials used are, as far as possible, sustainable; that is they respect the environment and are recyclable.

Development will be undertaken either via new construction or the renovation of old buildings, which perform poorly in energy terms.

Green Immo was set up in July 2007, at the same time as the acquisition of the site for the "GLOBE" project also presented on this website. 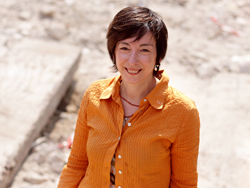 Esther Jakober, who was born in 1962 and trained in economics and finance, has had an exemplary career in the financial sector. After leaving her previous position as employee within a large Belgian finance group in 2005, she had the firm intention of establishing a professional venture which would create value for society as a whole.

After a sabbatical year, of which she took full advantage by travelling to the so-called underprivileged countries in Latin America and by following training in property development, she decided to establish a sustainable property development company. Outside of her professional career, property (renovation and building transformation) had always carried a particular interest for her, and the ecological side was triggered in visiting those countries where the excesses of our so called advanced companies are felt in the daily lives of local residents. In areas with fantastic countryside, everywhere we can observe the same factors; melting glaciers, species falling into extinction, forests decimated by uncontrolled exploitation of wood or oil, and the uprooting of local populations which follow in the wake and so on.

Property construction and use of limited planetary resources with one eye on the environment has more than ever become essential, and all of this within a regulatory framework favouring this type of environmental strategy and which makes it economically viable.

Designed, developed and maintained by www.scarabee2d.com